I thought it would probably be a good idea to document the existence of autoandrophilia somewhere, so let’s do it here.

Autoandrophilia has been observed for a long time. While Blanchard doesn’t explicitly label it AAP and doubts its existence, he has shared this story:

It also not–infrequently pops up in FtM spaces. Since anecdotes aren’t worth much, here’s the rates from a survey on /r/Genderfluid (I was not allowed to post on /r/FtM) with some experiences:

Diagram from the Transmasculine Sexuality Survey. Results were similar if asking directly about what they found arousing rather than about which themes were present.

If trans men are autoandrophilic, then this should imply that there’s some collection of nontransitioning AFABs who are also autoandrophilic, and have noticeable gender issues based on that. I’ve talked about this here, here and here, but let’s have a recap:

In surveys, I have no trouble finding some autoandrophilic reports. Probably my surveys are overestimating the prevalence of both AGP and AAP, but I don’t find much lower rates of AGP than AAP. To identify AAP, I use pretty simple questions like “How sexually arousing do you find it to imagine being the opposite sex?”; things seem reasonably stable under different phrasings. Autoandrophilia is strongly associated with desire to be male: 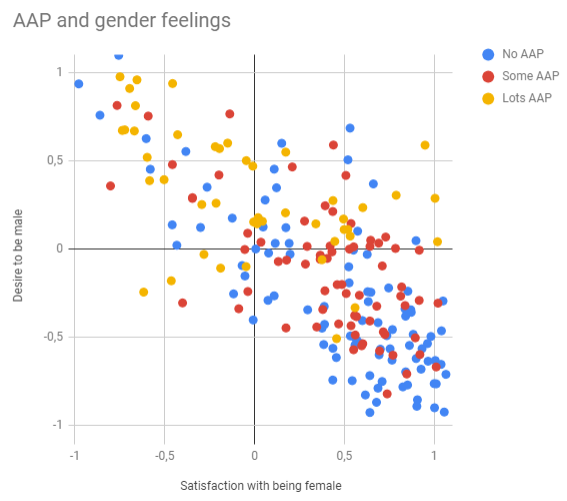 Association between autoandrophilia and gender feelings. This diagram was kinda tricky to make and needs to be taken with a grain of salt, because AFABs tend to identify as transgender/nonbinary at a lower threshold of gender issues than AMABs. This meant that to properly create this diagram, I had to include both trans and cis people, which can imply various issues. The effect is still there when restricting to cis women, and it’s about as strong, it’s just less striking because the data only exists in the lower-right corner.

I’ve also got some closer details, namely, what do autoandrophilic fantasies look like? Here, I got the information from autoandrophilic cis women, not trans men, so it may not quite match the higher intensities they experience. Still, it should be informative:

Sounds quite AAP to me, at least. This survey also found some other interesting points, for example that most of the participants started being autoandrophilic at the beginning of their sexuality.

A lot of people feel that many themes in AGP pornography are sexist (which they are, I guess), and therefore conclude that AGPs also are sexist. Maybe they’re also basing it on certain stereotypes about autogynephiles. Either way, the point is that people think AGPs are sexist. But is that true?

Not as far as I can tell. In my Sexuality and Attitudes to Gender survey, I collected 24 items related to opinions on gender and compared the attitudes of AGP men with non-AGP men. The result? AGP men were slightly more feminist across almost all questions; the exception involved AGP men being as feminist as the baseline. Here’s an overview: 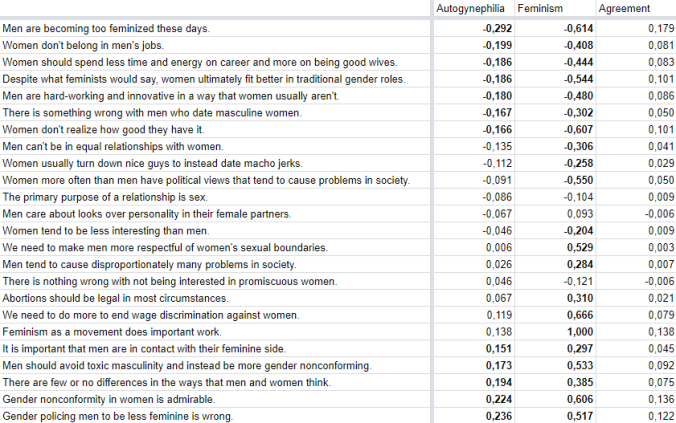 The above diagram shows autogynephilic men’s opinions on a variety of topics. They’re usually quite similar to those of non-autogynephilic men (half the correlations don’t even reach statistical significance), but the difference is there. The second column shows the association between feminism (defined as the belief that “Feminism as a movement does important work”) and each of the items. As you can see, for all the items where autogynephilic men differ significantly from the baseline, they do so in a feminist direction.

To make it easier, I’ve created an “agreement” column, which shows the agreement between feminist men and autogynephilic men. When the number in this column is greater than 0, they differ in the same direction, and with greater numbers indicating greater agreement. Even among the nonsignificant items, there are only two cases of disagreement, and they’re sufficiently orthogonal to feminism that their correlation with feminism isn’t even statistically significant.

We can take a look at some of the individual correlations too. In practice, most of the cases where autogynephilic men are significantly different from the baseline are questions focusing on gender nonconformity. Perhaps this means that this can better be summarized as “AGP men are no less feminist and more supportive of gender nonconformity than other men” than “AGP men are more feminist than other men”, but at the very least, it can’t be summarized as “AGP men are sexist”.

A subtler point is that what seems like sexist themes aren’t necessarily quite as bad as you might think. Degradation through feminization and forced feminine behavior sounds sexist, but often the dominant person may be a woman who’s not being degraded. This is more “misosissyist” than misogynist. That may be problematic in its own way, but it’s probably more complex than pure sexism.